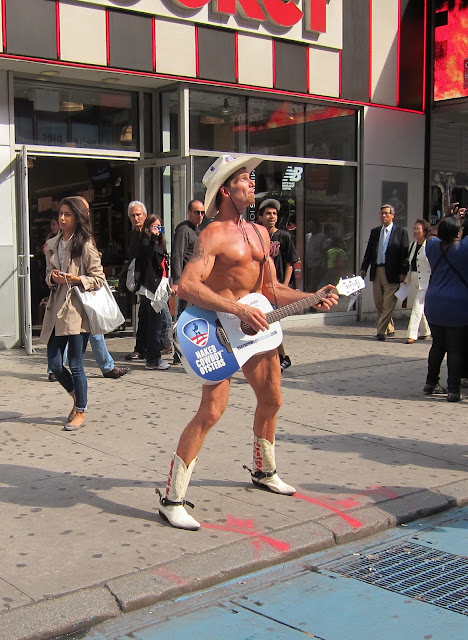 "The Naked Cowboy" singing to anyone who will listen
on the busy NYC street in the midst of Time Square. 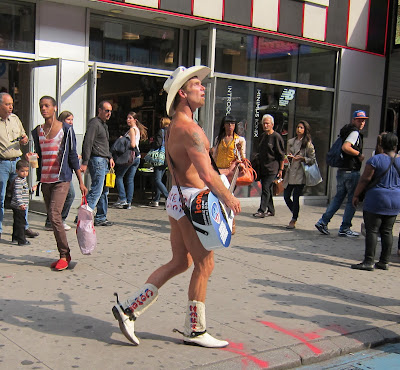 Strolling along in his "tighty whitey's".

This guy showed up around 5 pm each day
singing his way through the crowds
and interacting with anyone
who wanted to pose for a photo.
To his credit, he would pose for the photos
even sans tip.  That seemed unheard of in this town.

There was a huge ToysRus store in Time Square.
Just outside the door there were themed
characters (Elmo, Captain America, etc)
They would not stand still for photos
unless you tipped them first.
Except for the Naked Cowboy there
was nothing else that I saw which
was free.

This Cowboy was obviously eccentric
but if one was inclined to "strut one's stuff"
this guy had the body to do it nicely.
Just sayin'. . .

MOL/LOL
As they say anything goes in NYC the town that never sleeps. You are right at least he takes care of himself. But seriously he best stay in NYC as I'm sure he would his tighty whiteys would be kicked to the jail here.
Hugs C

There MUST be more behind this than meets the eye!

Ahhhh... the Big Apple... so many characters, so little time. I'm glad you could see the humor and also the amazing fact that it was a free show. That's the one thing about NYC that's really tedious: everyone has their hand out. In most cases, it's worth it, but you could go broke enjoying yourself.

You certainly did way more than we did when we were there but then you also were there longer than we were. Sounds like you had a wonderful time.

What a fun post!! You gotta love that cowboy!!!

You sure saw some interesting people on your trip to NYC. Not boring at all.

Hmmmm sounds like i need to take a trip to New york! LOL

Happy early anniversary!! Mine is May 28th :-) great month and my parents 46th is today!

Have a great evening!

I saw that guy on tv- one of those court shows- and he and his wife were suing someone. They lost, but I think his main objective was some publicity.

I have seen that guy on tv before. Can you imagine? lol xo Diana

That dude is famous! LOL! He's been the Naked Cowboy since 1997 and has appeared in LA, NYC, Cincy (he's from there) and even Dublin, Ireland. He's a regular in New Orleans during Mardi Gras. He owns the trademark 'Naked Cowboy' and actually licenses others to use the name. He does not approve of vulgarity, bad language, anything disrespectful and has actually sued people for mocking him in a defamatory way. Pretty funny what a person can do to make a living. :) Funny story: When we were in NYC a few years ago, I was within 3 feet of the guy and didn't notice him until The Hubster pointed him out! LOL!