When I write I prefer to use the word "adventure" rather than "goof-up", even though there is a part of me which knows this is not correct.  Let's just say that "adventure" seems to follow me with regularity, and leave it at that. . . 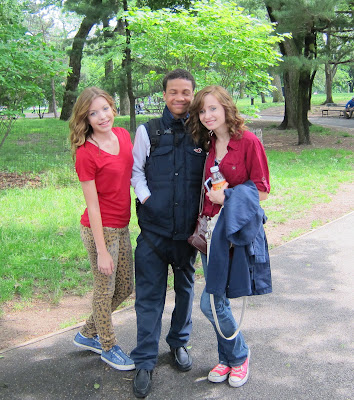 Take a close look at this handsome young man
in the middle.  He is a Hero!

One of my favorite things about NYC was seeing Central Park.  It was a great place for photo ops. 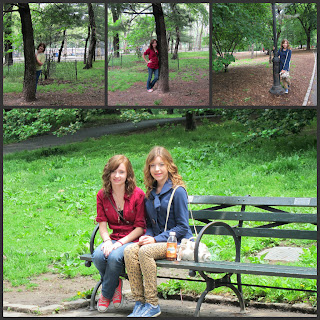 We spent some time here taking photos and enjoying
the beauty of the day.

THEN, we hailed a taxi and headed for
the SoHo district. . .we were almost there
when I discovered I had forgotten my camera,
leaving it on a bench in the park.

Suddenly I felt like a sad child and my two
lovelies began to console me.  They insisted we go back to the park - I knew it was a useless
cause as approx 40 min would have lapsed
before we could even get back there.
They continued to INSIST, soooooo, we told the taxi driver to
take us back to where he had originally
picked us up.
He did.

We jumped out of the taxi -
the girls left me waiting on a street corner
and they took off running at full speed
back into the park.

They returned only minutes later,
out of breath, smiling ear to ear,
carrying my camera.

Can you believe it?!

The story:  they returned to the park bench
which was surrounded by a class of students.
The cute guy in the photo had just at that
moment found the camera and was turning
it in to the teacher.
He could have pocketed
the camera and no one
would have ever known,
but he didn't.
We didn't get the boys name
but the teacher did take a photo
to "capture the moment".

So it was $15 (taxi) to SoHo,
$15 back to Central Park,
and then
$15 back to SoHo,
but it is something the girls
and I will always remember,
PLUS
I.Got.My.Camera.Back.
(If you follow my blog regularly you
will remember that I had just
bought this camera.)

What an GOOF-UP  ADVENTURE,
and a great reminder that there
are good, honest, people
who live among us.

What a blessing! Do I also remember from a past blog that you were a little uncertain about New Yorkers? ;-)

Just goes to show huh? I think that is a wonderful adventure! And a great lesson!

Very lucky for you...very sweet of that young man...AND Debbie you certainly do have your camera problems. Your hubby probably thought he was going to have to shell out for another one....I bet he LOVES that student. LOL

I love this! In general I think New Yorkers are some of the most helpful people in the world.

Wow, how lucky we're you! And thank goodness for all the honest people out there, so glad you're adventure had a happy ending :) xx

I LOVE this!!! (and not only is it wonderful regarding what a wonderful young man, but that you didn't loose YOUR CAMERA!!! you weren't kidding about having camera issues were you?? LOL)

A good story with a great ending - nice lessons for all. Sandie

Small price to pay for the assurance that there are still good people out there....even in NYC. I'm so glad you got your camera back.

I told you that I found New Yorkers to be so helpful and polite when we were there. I'm glad you did too..and it proves that only the bad junk gets on the news. This was a great teaching moment for the girls and that young man. It sure would make me feel great to see the happy face of someone who thought they had lost something precious and then have it returned. He probably looked at the pics in the camera and saw those beautiful girls faces too! He was a cutie!

Oh, I just love it when something like this happens because it does remind us that there are good people in this world. What an adventure!! (I'm sure you could have did without the adventure... but... good blog material anyway. lol)

Isn't that lovely to find that people are as wonderful as you hoped they would be? Kind of restores your faith in everything good, doesn't it? Love it!

So happy honey that an honest young sweet guy found your camera for you.
Your right there are still those among us and for that we are blessed.
Love
Maggie

That is AMAZING. What a fab story. Gives me a bit of a tear in the eye. A great kid and what an "adventure"!

What a wonderful, heart-warming story. It just goes to show you how many really GOOD kids there are in the world-but we mostly hear about the BAD ones! Congrats~ xo Diana

Wow you are lucky. My husband did the same thing with his sunglasses in Chicago. Only they were gone when he turned around. Right behind him. That quick. Enjoying your trip along with you.

This is so wonderful! especially to see in New York! Your girls are beautiful!
Have a wonderful day!!

Love this and I agree with Shelly, PRICELESS! The extra cost involved with cab fare was a reminder of the good that's still is around us! Your girls are beautiful setting there on that park bench..

what a wonderful story of an act of honesty. It doesn't take very much effort to be nice! I am happy you got that camera back too!

What a neat story! We have on similar. My sister left her camera at a deli - she thought we were getting it and we didn't realize she left it - sure enough the Deli workers had put it behind the counter - we were surprised too. So glad that we both found NYC to be an honest place - at least in those two instances!
Blessings,
Ava