There is a BIG Libbey Glass Outlet
where I live.  My BFF and I usually
go there about once a year to browse
and re-stock.  The prices are great
and it makes for a good outing. 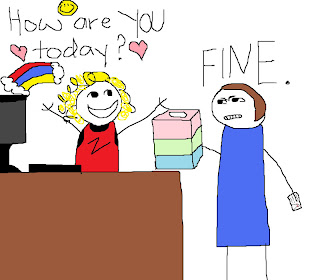 We each bought a few things.
My "finds" included a few glassware
items and a few pieces of silverware.
My entire purchase was $30 ish.
One of the things I like about this
place is the way they carefully pack
all the glass.  They wrap and re-wrap
then box it up for travel, even if you're
just going across town.  The "packer"
even marked one of the boxes with an
"X" so we wouldn't confuse them
on the drive home.  Great idea! Later that night I put the new glassware
into the dishwasher and left the box
on the counter.
The next morning I reached into the box
for the silverware I had purchased...
No silverware.   Rats!
The "packer" had failed to put the
silverware into the box with the glassware.
OR
perhaps she had accidently placed
it in my friend's box.  Called my friend -
nope, it wasn't in her box.
I had my ticket which showed I had paid
for the silverware, so I called the store
to make arrangements to come claim
my purchase.  They were polite but
there was quite a bit of "to do" about
this $6 portion of  my purchase..
They had me talk to two people,
then it was determined that the manager
would need to call me back later
in the day to "discuss this".  She did,
but by then it was too late to make
the drive to the store. . .The store
would be closed on Sunday so I
planned to go there on Monday.

Imagine my surprise
when I unloaded
the dishwasher Monday morning
and found the missing silverware.
If you've read yesterdays post then
this is beginning to make sense.
I had taken my "pill" before
unpacking the box and placing
the items into the dishwasher late
Friday night. While I remembered
unpacking the glassware,
I had no recollection of the
silverware. 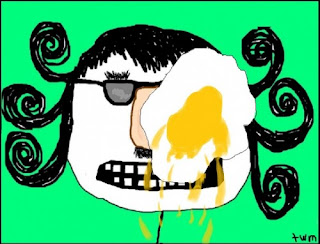 OMG how funny. As I read your story though I thought that maybe Ambien isn't a bad thing. LOL

Was your face red? Did you have to call the company back and 'splain to them, Lucy? lol xo Diana

O how funny!! That is the best story that I have heard in a long time!!!

So funny! At least you had your silverware - what did the store think of your explanation lol! x

Oh no I think you are hanging around me to much. lol
So something I would do and have done.
Happy Ending though you found your silverware. haha
Once again thank you for being my latest Blogazine Guest. I enjoyed getting to know you even better.
Love
Maggie

Heeheee! At least you weren't in the store, wanting them to take care of it in person. Hopefully you didn't have to talk with them again about it!

I am still chuckling. You are too funny. You better watch what you do after you take that pill... lol.
until next time... nel

Aww Deb, at least you had the excuse of Ambien. I've done things like that and just have to blame it on 'Sometimers'. Somethings I remember...some things I don't!
Hugs~

I've never taken Ambien but am flying to Asia this spring on a trip with my hubs and I'm thinking I might need one : )

well my dear that is a bit scary that you eat and not remember how about driving??I have a hard time sleeping also I use bendryl which doesn't help a lot. I can get to sleep I just can't stay a sleep.
Oh and by the way I could do that and not be on that pill. I enter a room and think now just why am I here?
cathy

Well the egg on your face will only last a minute. lol sandie

The store is probably just glad to have that "crazy lady" out of their hair and has forgotten about it by now.....and at least you have your silverware.

Oh my! LOL At least you have the Ambien to blame. Me? Similar happengs. No one/nothing to blame! :-)
BUT I am happy that you found your missing silver ware!

Happens to all of us, even if we don't take Ambien! I hate to be caught being "old!" Oh well, think of the gas you saved not having to make the drive again!

Oh mercy, how funny. However, I really shouldn't laugh 'cause I do that kind of thing frequently; especially after I take my "night night". :)