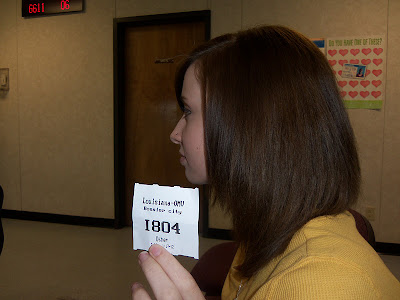 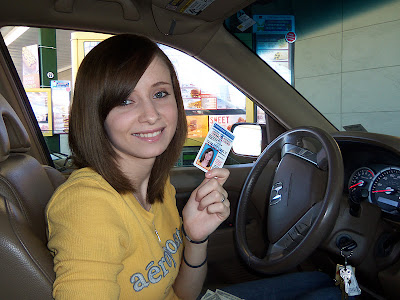 After.
Yesterday was a RED LETTER DAY – Princess got her driver’s license!  We were at the DMV at 1:00, as we had planned.  The usually calm-and-collected Princess was extremely nervous.  The line was long.  After waiting her turn she was told she needed her birth certificate.  (We thought since she had her photo driver’s permit that would not be an issue.  Wrong!)  Soooooooo, we made the 40 min round trip home and back.  By then the line was short and the process moved along smoothly.  Driving to the DMV she drove awful, scary, horrendous a little below her capability.  I was nervous for her, and rightly so.  When it was all said and done she felt she did not drive her best on the test.  He went over the test results with us and she did have some real “goof-ups”, but still scored high enough to pass.  On the way home she drove perfectly!

The only thing I remember about taking my driving test is that I was very nervous and we had to drive a long distance to get to the testing center.
Do you remember taking your driving test?

wow what a day, thats one for the books, congrats to your daughter, we always are nervous when being judged, poor girl, all over , til she's 80, well in Canada we get rechecked when we are 80 for our driving permitt.Hope my eyes are fixed by then!

I laughed at your "I'm just a girl who know how to have fun"! I'm so glad Princess left with license in hand...two or three of my five kids had to return for another day. Now that was not a happy drive home.
Hope root canal is done and you can have a celebratory weekend!

What a great day for her! My teenager, who will be 16 this summer, actually has a countdown day until her driver's license day. Glad it worked out well for Princess!

I do remember my driving test. It all went quite well but you're never sure whether you'll pass or not - I did :) Came out and my Dad asked me if I'd passed and I burst into tears. He took that to mean I hadn't (lol!) until I managed to choke through the tears that I'd passed :)
Hope the root canal went ok - you sure know how to have a good time ;o) xx

You are all full of good times...LOL.

Yes, I do remember taking my tests, I had the one in the state I lived in at 16 and then had to take another one when I was married and moved to NC, both times I went at then end of the day, both times I failed and both times the cop told me he would pass me because he thought I really was a good driver. Knock on wood...I have been an excellent driver.

Oh...CONGRATS to your daughter and she looks just like you.

Congratulations on your daughter being legal to drive now!

And condolences on your root canal!! You need to come up with less stressful activities!!

No, I don't remember a thing about it. Guess it was just too long ago!
Hope the root canal went well. Deb, you just HAVE to stop eating those rocks! :)

Congrats to Princess. She did it. That was no small achievement considering all you needed to do. 2 of my 3 girls were scared to death of driving. Now they drive all over. We got them all GPS systems so they are very confident now.

I'll be back to see what happened later. Goodness gracious.

No I don't remember my driving test but I do VIVIDLY remember my daughter's (24 years ago). I made a promise to here when she had her learner's permit and I kept it but I was a nervous wreck all day.
The promise was when she got her license I would let her drive me to work then keep the car then pick me up. Lesson learned: be careful what you promise.
We went at 8 am to get her license she passed with flying colors (she and her dad had been driving at least once a day for nearly a year). I worked in a city about 20 miles from home...in my mind's eye I can still see her tail lights as she drove away. All is well that ends well.
CONGRATS to Princess!!
Hugs Madi and Mom

A root canal and a new driver all in the same week. Bless your heart : ) Can't remember if I sent you this link but check it out-hilarious! Someone sent it to me when I wrote about my oldest learning to drive and I still share it when I read about parents of learner drivers.

I vaguely remember my own driving test, but I remember my kids tests very well. A couple of other things I remember are those first few months after my kids got their licenses and my last root canal, both things I would like to forget :)

I do remember taking my test. The worst, of course, was the parallel parking...and I was driving a huge old BUICK! lol...AND I got the guy that was known as the "tough tester" and passed anyway!

Congrats to Princess. Now you can send her out for milk.....if you dare- xo Diana

Hey I'll let you have fun alone getting that root canal. Congrats to the princess on her driving test. Love, sandie

Congratulations to your Princess!! So exciting!!! Good luck with your root canal...hope you are feeling o.k.!

And I think congrats are in order for the driving test, right? It's a big step for a teen and an even more nerve wracking one for the parents. High five to the Princess!

Congrats to your daughter - that IS a red letter day! Hope your poor mouth is not suffering too much!

Those wonderful days when your child becomes a license driver. I held my breath as my daughter drove to school by herself for the first time. Every time I heard a siren I just knew something had happened. For some reason, I never had any worries with my son. He had been driving since he came out of the womb. I think he was born with a steering wheel in his hands.

It would've been devastating if she hadn't scored high enough to pass! My test was simple: 4 right turns, and back into the DMV. I think it's a little tougher now: I think they might have to actually make a couple of left turns now.

Yea for your Princess! My son is 18 and we have to force him to get a license! He dislikes the traffic here. SO we just want him to drive when he needs to go somewhere nearby right now. Our daughters were like that too!
COngrats to your girl!