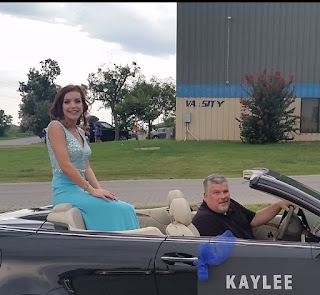 Tuesday I packed up my sidekick, HK, and we took a little two hour drive to my Tulsa daughter's to attend the town Homecoming Parade.  Our oldest granddoll, Kaylee, is a high school queen candidate.  She looked so pretty all dolled up and seated on the back of a convertible.  It truly was a "Cinderella Moment". . . 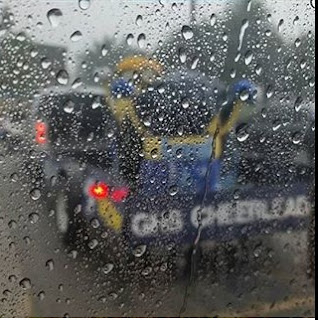 They had no sooner  (pun intended) taken their place in the parade line-up, when it happened.  The thunder rolled, the lightning flashed, and the parade was cancelled before it even officially began.  Alas (love that word), it was rescheduled for next weekend.  HK and I won't be making the trip again, so we'll miss it, but we enjoyed the rainy preview.


I really like to think I've matured and grown above petty snobbery, but the truth is, sometimes I like to  brag a bit  flaunt my privilege a bit.  This is one of those times. 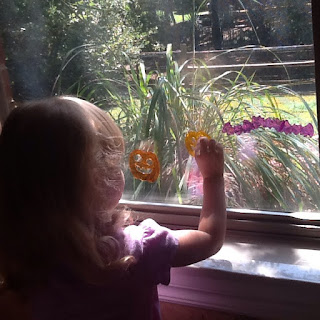 This year I have my own personal "Fall Decorator" decorating
my house for the season.
"Eat your heart out Martha Stewart!"

You have the BEST decorator. I love that age, always learning, always trying things out. Hugs to you all and prayers continue.

Enjoyed reading this post, am glad to be here. Hope u have a good weekend.

So sweet! Love your blog!

Now that is one cute little decorator...she has a future. How is the new baby doing?

Awwwww. Such a sweet time you are having with your little grand doll. I am so happy for you that you are close enough to home now that you are able to make a road trip ALONE!! Your oldest is such a beauty and hopefully the parade will happen. I hope her dress survived the pouring rain.

Good news about your son and your new granddaughter. I like your sweet decorator. Some times they decorate the walls without asking. LOL. Blessings, xoxo,Susie

It usually rains on my parade when I plan any outdoor event! I hope they can do it next week. She's beautiful! You have every right to be proud and to love your little decorator helper! I hope all is well with your new grandbaby! Take care!

I love it!!! So happy you are back blogging and bragging!!!! I do love you!

hello! I popped over from Linda's blog and I am soo glad I did. I haven't met anyone new in blogland in quite a while and it is just time to make some new friends! I read through several of your posts and thoroughly enjoyed myself getting to know you a little bit. Ill be back for sure....Oh, and your personal little decorator is just as sweet as can be. Hope you enjoy your week-end!

First, congratulations on your new grandbaby, hope all is well :) And what an adorable little decorator you have :)

Congrats on the Cinderella granddoll. I hate you will miss the parade. Love your little decorator.