Wendy's:The Parable of Teens and the Homeless Man

Princess, who is 17, shared this true
story with me.  Some of her friends
were a part of this. 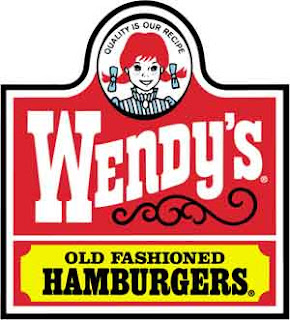 A few kids in the church youth group
went out to grab a burger at Wendy's. 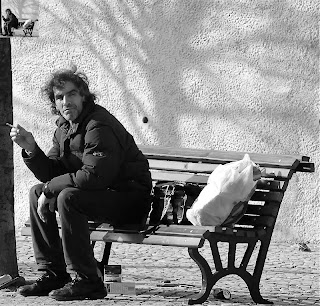 As they sat eating, their eyes were drawn to
a man who had entered just after them.
Hair mussed, wearing probably all he owned,
he was quite obviously a homeless "street person".
He did not go to the food line to order,
but instead slung his backpack into
a booth, sat down, and simply stared
into space.
The kids watched to see
what he would do next . . .
In a few minutes the man stood
and went into the restroom. 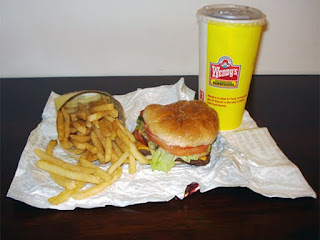 This was their opportunity to practice what
they believed and put their faith into action.
They quickly put their money together
and ordered up a burger, fries, and soft drink
and placed it on the man's table.
There were many people in Wendy's
so they knew they could remain anonymous.
In minutes the man returned to his table.
He looked at the food.
He look around the room.
He seemed angry.
He picked up the food and walked
straight to the garbage can
and threw it away.
Then he sat back down,
opened his backpack,
took out his computer and began to work.
It seems the man was neither homeless
nor unemployed.

The kids exited quietly before
convulsing in laughter.
"Things are not always as they seem".

Oh my goodness. How unexpected- but bless their sweet hearts.

Wow! Things are not always what they seem! I am impressed with these young girls! Guess that it isn't our place to decide what the receiver does with the gift, but to give when we see a need.

Oh my word...at least Princess and her friends tried and I commend them!!
Hugs C

Well, that was a shocker. Talk about turning a nice thing into a misdeed. That guy needs to take a long look in the mirror. Good thing the kids were able to laugh about it.

Hmmmmm-Things are OFTEN not what they appeart to be. It reminds me of someone walking up to a gal that is carrying a bit of extra weight and asking her when her baby is due...What's the old saying..ASSuming makes an ASS out of you and me. xo Diana

A good deed from the kids anyway. I hope it doesn't discourage them. I have seen real homeless people in fast food places...they have even drank out of left over cokes left on the tables. Sad. Tell your princess God saw her good deed. Smiles, Susie

In this case it was certainly the thought that counted - I wonder if it made him take a look in the mirror to see what the girls had seen! I'm glad they saw the funny side :) xx

The heart is judged by our willingness to give...not by what is done with our gifts.

I heard that said once when I was a young girl and I've never forgotten it. It helps when I fear my gift for food will be used for 'other things'.

Oops! When you give, occasionally you may be taken advantage of.... but give anyway.
Life can be hit and miss, but I'd rather waste a little bit of money than neglect a person that truly is in need...
When you do what you think is right, it always benefits the person that's giving...

It sounds like the girls took it all in the right way and will be willing to give again if they see the need. Good story.

He may not have been homeless, but he was obviously selfish and rude! How sweet of those kids to let their heart for God lead them to do something so kind. I think he should have just eaten the food and looked around and smiled!

It brings joy to my heart that they went out of there way to be thoughtful to a complete stranger. I am just glad they saw the funny side of the story and they were not heart broken. Way to go youth group!!!

Let's see, I think they call that a paradigm shift? I laughed when I read this and then thought "he's probably heading to Wal-Mart next!"..then I laughed again! I hope this doesn't step on their giving spirit. It was a really nice thing to do. They must be a great group of kids!

I am pleased to see there is still such compasion in the world especially in our younger generation. Good for them, that there first thought was to help and not poke fun of. A lovely story. Thanks for sharing. Cheers SpecialK XoXo

I loved this story. What a great example of things are not always as they seem.

I give the kids an A +. They actually did something amazing. In almost any city across America, the ending would have been much different.

Oh dear... I hate when that happens! What good kids they are, and they should never be embarrassed to have their hearts in the right place. It takes practice to judge situations correctly, and even then we're not always right, are we? You've raised a good girl there.

This is a real heartwarming story in spite of the man being ungrateful. I hope the young people always lead with their hearts!

How sweet of them! And how RUDE of him! :( Even if he wasn't homeless, he could have accepted their gift graciously rather than behaving like a brat.

What a great bunch of kids! Shame on that man! He was very rude! But using good manners and knowing your child and her friends have good hearts is all that matters! Young kids today do not get a lot of credit that they do deserve! Good story!