(CBS News)
Andy Rooney, the "60 Minutes" commentator known to generations for his wry, humorous and contentious television essays - a unique genre he is credited with inventing - died Friday night in a hospital in New York City. (11/5/11) 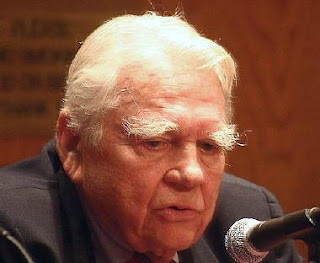 May he rest in peace.
I actually liked his essays
and enjoyed hearing him read them.
If you are grieving his loss
let me assure you that
his "eyebrows" live on.
And they live on ME!!
All of sudden my eyebrows have taken
on a life of their own.
They grow quickly
and the new ones are wirey
and often GRAY.
(sobbing into my crying towel now)
I pluck.
I wax.
I tweeze.
I thin them.
I even shave them a tiny bit.
Sometimes I think I can even
see them breathing.

In one of my Christmas posts I asked about Linus' last name.  If you answered "Van Pelt" you are totally right!  ALSO, lots of comments on making the list, "100 Things About Me"  This is much easier than it sounds.  Begin by making a list of the things that come to mind quickly, then leave paper and pencil on your cabinet/or in your purse and each time you think of something write it down.  You'll be surprised how quickly it will come together.  Be sure to let me know if you post your list!

AH..Yes-the eyebrow issue! I have it...when did my beautifully tamed eyebrows need to be "trimmed"? Sigh...well, at least I don't have a mustache-YET! Being fair and blond I don't appear too "hairy" but the eyebrows give me away.

Andy Rooney and Donald Trump- quite a pair~ xo Diana

Oh my, you are a long way from Trump or Rooney (I liked him too) but I understand eyebrows being a problem. I have been getting mine threaded.....it hurts like crazy but it works.

You crack me up with your honesty in facing these things "head on." So funny! I recall a previous blog you had written that discussed hair and even mentioned boob hair. That one really "raised my eyebrows!"

Keep on writing. I love your blog! And I liked the list, too.

You crack me up with your honesty in facing these things "head on." So funny! I recall a previous blog you had written that discussed hair and even mentioned boob hair. That one really "raised my eyebrows!"

Keep on writing. I love your blog! And I liked the list, too.

So you think that Andy Rooney's eyebrows are being reincarnated in your ? ;-_)

Well, it's better than having them disappear completely! It's also better than nose and ear hair...not that I have any of the above issues...

Ah yes, that whole (I cannot see to pluck withOUT my bifocals, and I cannot pluck with them ON") so one frets! :)

No worries, whatever your eyebrows are doing, it doesn't show - you look great. :) Happy new year! ...Marsha

LOL...Oh dear let me think of a genteel way to say this...ummm as a lady becomes more mature she finds hair ceases to grow in some places (i.e. legs and pits).
I'm beginning to think my pit hair grew up through my brain sprouting out at my eyebrows....
I'm just sayin'...I'm older and wiser about the ways of the hair.
Hugs
C

Sweet Tea...you are waaaay too cute.:)

Now, I don't like the EYEBROWS....but if I started getting THE DONALD'S hair, I'd have to kill myself !!

Hey girl - they do color eyebrows too - or so I am told. I don't need it of course. HA
sandie

Maybe you can start your own fad and braid your eyebrows?? How about a mohawk?

I'm praying that this gray wiry stuff becomes tame because so far, it hasn't gotten the memo.

I loved Andy Rooney in spite of all his grumpiness and his eyebrows were a hoot!