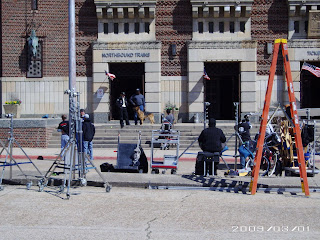 Can you find "Cool Dog"? 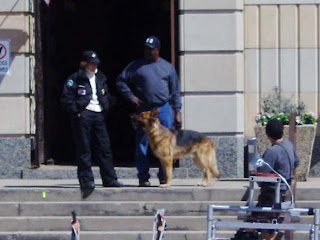 We happened across the set as they were filming the new movie, "Cool Dog" in downtown last week. Seems we have our own little portion of Hollywood right here in our corner of Louisiana. Lots of movies are filmed here these days; so much so that JB's company sends out emails telling all employees which streets to avoid while coming & going to work on certain days, because of filming...There have been lots of "celeb sightings" in town during the past couple of years, Kevin Costner, Diane Keaton, Josh Brolin, etc...And now we're among the lucky because we've seen "Cool Dog" before the rest of the world got to...The kids in your life will be sooo impressed.

You are seriously my idol.

That is awesomely cool! I can't wait to tell my poodle!!

How fun!! I would probably walk right by without realizing who it was. I am cool like that!