"It happened in a flash".

I hardly know where to begin with this post, other than to say this was a very frightening incident. 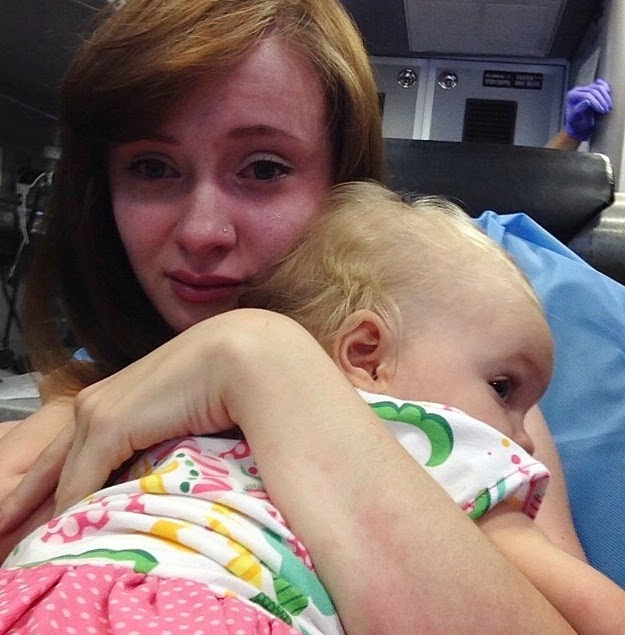 Li'l Mama and HK riding in the ambulance 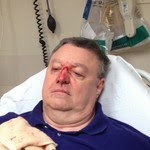 I'll begin at the end so you'll know that everyone is fine now.  (big sigh of relief)  This all happened earlier this week and I'm just now finding some time to blog about it.

Here's the story.
Mister met Lil' Mama and HK in the parking lot outside the AT&T store.  Mister was carrying HK as they walked across the parking lot.  He somehow stumbled over the curb and fell.  HARD.  He managed to shift himself a bit as he fell trying to protect HK from hitting the sidewalk.  She received only a small bump on her head but he hit the concrete face down.  You can see where his glasses cut his nose.  They said it happened in a flash.  Mister bled a great deal, (from both inside his nose and from the cut on the outside of his nose.  An ambulance was called and they all rode together to the hospital.  HK checked out perfectly and Mister went home with a crack in his nose along with 7 stitches, and scrapes to his arms and legs.

They (Mister & Lil' Mama) said that helpful people seemed to immediately appear upon seeing what had happened.  Two people come with towels to help Mister stop the bleeding from his nose.  Another man ran to his car and came back with a first aid kit and began to help, while yet another man brought cold bottled water.  Two women employees from AT&T came from within the store and helped Lil' Mama (who had a bit of hysterics) and HK into the store where they calmed them both while waiting for the ambulance.  Lil' Mama called me from the store.

Three things I'm reminded of
as I think about all this -
1. Life can change in an instant.
2. There are still lots of good, helpful people in this world. (Angels, unaware?)
3. God is merciful.

Oh no! I'm so glad they are all ok, but what a scary thing for them, and for you getting that call. Things can certainly happen quickly.

OH how scary!!!
I am so glad it wasn't worse for lil mama..
Wishing Mister a quick recovery.
Those curb sometimes just sneak up on us.. I am always wearing heels and that is my biggest nightmare when I carry my baby.My husband is always after me for that.
Thanks for sharing your story.

The three things you were reminded of are so true....and a good reminder for all of us. I am so glad that no one was hurt worse and that they are on the mend.

So thankful everyone is okay. This made me cry because that is how quickly our lives can change. Thanking God for His blessing on you and your family.....((HUGS))

oh my, thats very frightening, the automatic instinct to protect the baby, wow, I'm so glad injuries were not worse, poor hubby, he looks like he was in a big fight,

Praise GOD all is well!! You are so right - all of life can change in a blink of an eye! We are one heartbeat away from eternity.
I am always amazed but never surprised at how God provides. He puts the right people exactly where they are meant to be.

So glad everyone is good but so scary. you are right in a blink your life can change.
Cathy

What a relief that they are okay. And you're right. There a lots of good people out there.

Holy Moly! Bless your hearts. I'm just freaked out over here. Praise God that they are ok and for all the angels he provided.

Holy Moly! Bless your hearts. I'm just freaked out over here. Praise God that they are ok and for all the angels he provided.

Thank God all is going to be fine. Your husband and daughter look so pitiful. I can see your daughter had cried hard, poor kid. Your husband's going to need extra care. Bless his heart for trying to protect the baby. You are so very right, it only take a second. I am going to wish you all the very best, sending hugs for everyone, Susie

Holy cow...what an ordeal for everyone. I'm so glad they are all OK and I'm sure hubby will have a lot of healing to do. He was really quick to protect HK when he was falling..amazing! I hope it's a good Mother's Day weekend for you all.

aww poor hubby looks devastated. he must feel horrible about the baby . glad to hear they are both doing ok.

There ARE good people. I am thankful for that too. Glad it was nothing too serious.

Oh gosh I am so sorry to hear about your loves. You are right. Things just can change in an instant. I am so glad they are all going to be fine.

Oh my goodness. Scary. Glad everyone is okay.

Oh my! Scary scary. So glad all are ok. We'll do whatever to save our little ones. Happened to this BonBon on the top of a mountain. Scary!