"Diapers and the Old Wet Hen"

Lil' Mama has recovered from her bout of Strep so things are back to some form of normalcy around here, whatever that looks like.  *insert my photo here with a puzzled look in my eyes* 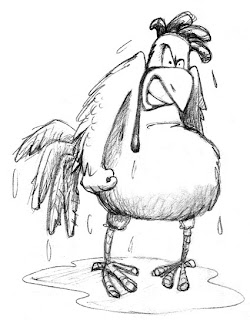 Yesterday Lil' Mama came in from her classes waving a piece of paper in her hand, and as my Daddy would say, "she was mad as an ol' wet hen".  She had gone to her car after classes and found a parking ticket waiting for her.  She was livid!  She says she arrived early for her class, still all the parking places were taken.  They're in the midst of a building project at the school so some of the parking lots are not in use right now.  Sooooo, what to do?  She parked in the Teacher's Parking Lot, which she says always has lots of open spaces.  OOOOhhhh, what a mistake!  Anyone who has spent any time around a college campus knows that faculty parking is considered "hallowed ground".  Still, Lil' Mama says she paid for her classes, she bought a parking permit, and it's not her fault that there's no place for her to park so she can attend her classes, though she did mumble about how she wasn't gonna park waaay out in the field because she didn't feel it was safe. (?)  She plans to take this up with the campus security on Monday.  Can she win?  No way, but it never hurts to calmly let your complaint be heard.

How much is the ticket?, I asked. 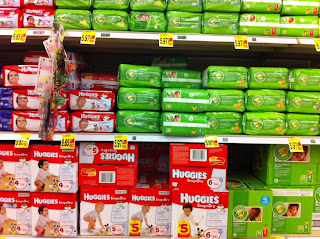 I hear versions of that reply very often these days, ie, "I could buy a box of diapers for what it costs to do that". . ."Why, that's half the cost of a box of diapers". . ."That's a lot of money, I could buy diapers for that". My how her world has changed.  Now that she has a child, all discussion of money is made in comparison to the cost of diapers. I gotta hand it to her, that girl can budget, and she can sniff out a bargain in town or online - she knows what things cost and she's not gonna  buy anything that's not clearly a bargain, and give her a coupon and you've made a friend for life! 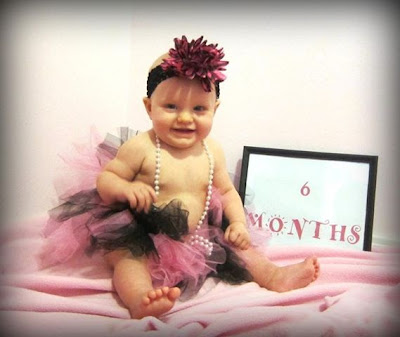 BTW, here's our little Grand Diva, user of said diapers.
She doesn't seem to be worried about the availability
of her diapers, does she?!

That baby is just soooooo precious!! And nope, she does not seem to be worried about diapers at all!

She's just adorable!
The collages my daughters went to had the same problem. It really is maddening to pay for parking and then have none available.

And 6 months is a bit early for potty training.

Lil Mama is learning the hard way that everything has a price in life, and even with all the joys of children, they're a lot of work and a lot of expense.

On the other hand, she will learn alot from dealing with campus parking that's "too far", such as being way early, and then going to study in the library?

Parking at colleges always seems to be a problem, and you are right, they always win. On the other hand, Lil'Mama has a winner in that cute little Haylee Kate.

That is a good Lil Momma!!!

She may have learned a thing or two from her older Momma:-)

What a cute little Diva you have there. Isn't it funny how a baby changes your whole life? What would have been the cost of hanging out at the mall with a friend changes to the cost of diapers.

I'd say give it a try on having the ticket dismissed. xo Diana

Ah the little Grand Diva is a doll!! As for her Momma, I don't blame her for being ticked off. You pay a lot of money for school and a parking permit. I feel for her and I commend her for being such a good money manager!!

That is the most precious picture I've seen yet of that sweet baby girl.

6mos already?! She's beautiful and adorable..you can see her personality coming out in that photo! Yep, kids have a way of changing all our perspectives and checkbooks!

When I took college classes I learned the hard way about parking too. I usually had to go at least 2 hours early and drive around the parking lot or sit waiting for a someone to leave. It's crazy! Good luck to lil' mama.

What a beautiful baby - love her happy face and fluffy tutu! I'm with your daughter on this one - it's not fair to take their money and then not make parking spaces available. Not sure what the solution is, but it will be a good experience for her to fight for her rights!
Glad everyone is feeling better. Strep is nasty...

Oh yes!!! A little diva like that will change your world. She's so cute!!!
I don't blame Lil Mama one bit for not wanting to park out in the field. Glad she is well enough to be back in school and posing HK for the adorable pic!

What a darlin'. I remember those days of parking lots and diapers...soooo many years ago! I would be livid too!

Loved the post...and I remember when I referred to everything as the cost of diapers too.