More than a Name. 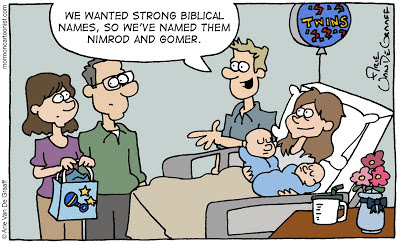 I've always had a "thang" about names.
My family say that I'm a "Name Snob", as I have such definite likes and dislikes about names.

Yesterday my BIL randomly posted about his name - "Tim". I love me a name with a story.  He was named after " an American actor, military officer, and expert on American Indian life and customs."   Fascinating stuff.

My Mom tells me my name, "Deborah" was chosen for two reasons:

Mister's name was chosen because of a close friendship.  Mister's Dad and his war buddy were the only two men to survive an attack of some type during WWII.  Mister was named after this war buddy of his Dad.
I love this stuff!

How did you come to have your name?
Do you know?
Do you like your name?

My name, Margaret, was given to me by my dad, who liked the name. I have two older brothers and two older sisters who all have normal names, likes Cindy, Steve, Gina, etc. Me? Margaret! Can you imagine sticking that moniker on a defenseless little baby? He said he liked the name.
It means Pearl, and I have grown to appreciate my name over the years. I am God's Pearl. :)
I remember blogging about my name a year or so ago. I think I'll have to find it, spruce it up, and repost...now that you've brought it up. lol

I was supposed to be named Sally, but I ended up being born on an uncle's birthday....his middle name was Jean, so I got that and I have always been call Jeanie.

I blogged about my name once.....my daddy named my Nancy from the cartoon Nancy and Sluggo....I am eternally glad he didn't like Sluggo best! My middle name, Grayce was after my mama's sister. I hated my name as a child, but it's ok now :)

My siblings and I as well as my mother and their father all have names starting with 'L.' Only my half sister whose father was my step was named differently. Even the sister who was given up for adoption has a L name!
Linna Pauline
Lloyd
Linda
Lloydine (Do NOT tell her I told her name!!! She goes by Deanie! She HATES her name!!)
Lanita
Lonnie
Luann

Amber gave all four of her babies (quadruplets) the same middle name - Lee.

I named my children for names with meanings important to me.

What is that saying? A rose by any other name would smell as sweet? However so many times we do indeed live up to our name!

My mother had me in 1960 and one of her favorite movies at the time was Tammy with Debbie Reynolds. So she named me Tammy. I am not at all fond of the Tammy movies and I really hated my name when a boyfriend in high school sang the theme song of the move it me. His Mom was a fan of the movie as well. I've gotten used to the name, but I'm still not thrilled with it.

Hope you had a GREAT Mother's Day and my brother Andy names me Sandy! sandie♥

I ran out of words to describe the photos. Anyways, they are unique and cute. The first one seems like just making a joke of playing. The other two photos are really, really cute. I wish I could have one little, cute baby as well. Thanks for sharing them with us.

My mother's name was Shirley and I'm Cheryl, after here. I can't imagine anyone I'd rather be named after.

My mother wanted to name me Jeannie. One of my grandmas opposed that name. So my mother gave me the name Connie Jeanette. (after my dad, Conley and her, Betty Jean.) She told me when she and her favorite cousin played with dolls, her cousin's doll was always named Connie.
Connie means constant and steadfast
Jeanette is a Scottish Name - Diminutive of Jean: Scottish version of the Old French Jehane, a feminine form of John: God is gracious.
I didn't like the name Connie growing up, but have come to be content with it for its meaning and God has indeed been gracious to me.
I like the story of your husband's dad. Love the cartoon.

I was named after my aunt who had been named for the actress, Deanna Durbin. I've always liked my name.

My name, Antoinette, was misspelled by my mom. My dad's middle name was Anthony, so she put down "Antonette". I had it legally changed about 10 years ago.

Because I grew up with what I considered a "boys" name or unisex, I knew I wanted gender specific names for my children being that I know what it's like to grow up with people thinking you are a boy at times.
My mom babysat a little girl while pregnant with me named, Shawn, she loved the name so much she decided if I was a girl that would be my name. I disliked it very much as a child but as an adult I've grown into it.

I did ask my Mom about my name but didn't really get a good answer. I always wondered since my sister who is 2yrs. younger is named after my Mom. I guess I'll have to be content to be the smart, good looking one instead. Oh yeah, I do like my name...Kathleen..although some say my middle name should be "sarcasm"..I don't understand why.

I have no idea about my irst name (Laurie) but my second name Jean is after my Mum, and Grandma, my mother never told me that until both my girls were in their 20's or I would have named my girls that name as well to carry it on.My daughter named her baby girl Gracie Jean so at least it will carry on, I admire your fascination for names, I have never given them much thought and it really is an interesting subject,