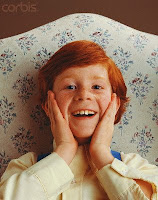 *Please note the names have been withheld
and the photo substituted, to protect the guilty. 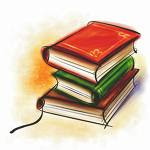 The VERY good mother watched her boy and his BFF drop the books into the bookdrop and scurry back to the car. As the VERY good mother took the car out of the Park gear and was just beginning to pull away from the curb she noticed a middle-aged woman, running from the library toward the car. The library woman was red faced and waving her hands rapidly. . .The VERY good mother lowered the car window to see what was wrong with the obviously, distressed woman.

The angry woman approached the car.

It was reported to the VERY good mother that her red-haired boy and his BFF had SHOUTED into the book drop as they dropped the books into the drop-off slot. The exact words, which had echoed through the quiet library?

The middle-aged librarian was outraged.

The VERY good mother was shocked and embarrassed.

It was a very long time before the red-haired boy and his family returned to the Public library.

There is no moral to this story,
other than to say "even
VERY good mothers have children
who sometimes do embarassing things".
AND
it makes for great story-telling each year when the
family gathers for holidays.

This could of been a page from my life. Hey, they are kids, and to them it was funny. It is funny to me too. (but I would never admit it to my children)

Guess what I just did? You're right! I just put together my slacker recipe for supper tonight.

loved the story! I had know idea that motherhood would be so humbling a profession!

I would have been mortified! That story deserves to be told..again and again..

LOL! That is hilarious & EMBARRASSING!!

So that's who that was...Darn kids.

Very funny. I guess that just one of the many "joys" of having kids. LOL!

Hi Friend.. It's a nice feeling to visit your blog.. Interesting posts.. Keep up the good work.. Do visit my blog and post your comments.. Take care mate.. Cheers!!!

I laughed til I cried. It is so good to know somewhere out there...is another mother....with a very good son....who's reality check bounced. Thanks for sharing this. I will chuckle all day long over this.

HILARIOUS! My kids will sometimes do crazy stunts like that too (and I giggle up a storm...inside of course...) LOL! Funny post!

I bet they thought they could get away with it!

This is for you
http://theclutterboxblog.blogspot.com/2009/02/i-got-blogging-award-i-love-love-these.html

Just be glad that's all they said! Kids....gotta love em.